Hunting and clay shooting are two parallel worlds, often united by common enthusiasts and the use of the same weapons and very similar ammunition. The ballistic differences are subtle, as are the technical differences required in the weapons. What is certain is that the high quality of the powders always results in successful shotshells.

It is by now well known to all that the history of Baschieri & Pellagri started with its founding in 1885. The great company from Marano di Castenaso (Bologna) came into being with the manufacture of Acapnia powder, one of the first Italian powders to be smokeless and characterised by surprising quality and ballistics for the time.

In just a few years the qualities of Acapnia, which was soon joined by Anigrina Granulare, became evident and known to all. In the late 1800s and early 1900s, the red powder, manufactured in Bologna, made a real difference in hunting and in fact propelled the Bologna brand to market leadership. 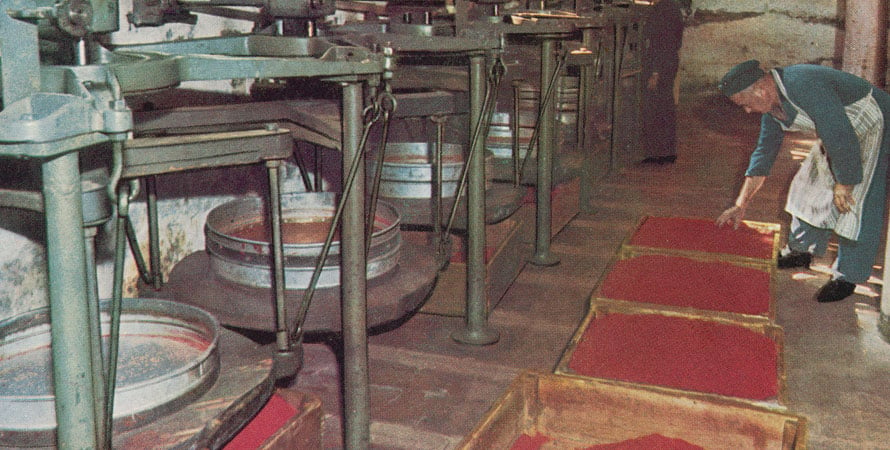 Soon, the area where the need had arisen for modernisation and something more effective, new and powerful, turned out to be that of clay piegeon shooting, a very aristocratic activity that was widespread, especially in the big cities, in splendid fields set in luxuriant surroundings where, in addition to the leading shooters of the time, personalities, nobility and a very strong sporting spirit stood out.

In the shooting sector, other national and European competitors created modern and powerful powders that gave the ballistics of these leading cartridges levels of performance that were clearly superior to and different from those known and respected up to that time.

Sidna, Sipe, S4 and DN had already appeared at a national level, and at a European level, the British, Belgians, French and Germans had already developed, or were in the process of developing, modern propellants based on a highly effective innovation: the gelatinization of nitrocellulose or the addition of nitroglycerine.

The company from Bologna did not sit on its hands, and at the end of the 1920s, Ulisse Manfredi, Maria Baschieri's husband and director of the factory, began research into a modern powder with the necessary qualities to “win” pigeon-shooting competitions.

Ulisse Manfredi had exceptional skills and character. In fact, after his time spent studying (he took a second degree in chemistry to equip him for the task ahead) and designing, he came up with a new powder called 'MB' whose initials were simply the initials of his beloved wife.

The production method changed, totally replacing the grinding and milling method of Acapnia, to hot rolling, which also created the necessary gelatinization on the new powder.

In 1929, the MB powder was officially launched and with it the “MB Tricolor” shotshell; the new MB was not called hunting powder, but “Special powder for pigeon-shooting”.

The new ultra-pure nitrocellulose monobasic powder, with its high nitrogen content and complete and perfect gelatinization, was powerful, unaffected by climate and humidity/temperature, highly stable chemically (and later, as we shall see, also over time) and, above all, it created deadly cartridges with astonishing effectiveness on the birds used for shooting contests.

It didn't take long: the MB Tricolor cartridges, which were even differentiated into three seasonal variants with different coloured cases, were highly effective, often carrying the shooters to victory.

In fact, the great pigeon competitions from the beginning of the 1930s in Monte Carlo, Paris and on the most prestigious fields in Europe became the domain of these shotshell and the fame of MB powder skyrocketed.

After the war, which had not seen a total standstill, but nevertheless a significant pause, life on the shooting ranges resumed with frenzy and enthusiasm. The years in which everything had stopped had created a strong desire in enthusiasts to start again and so the great competitions resumed. New ranges sprouted like mushrooms everywhere and other shooting disciplines, in particular clay shooting, joined and flanked those of pigeon, starling and sparrow shooting. 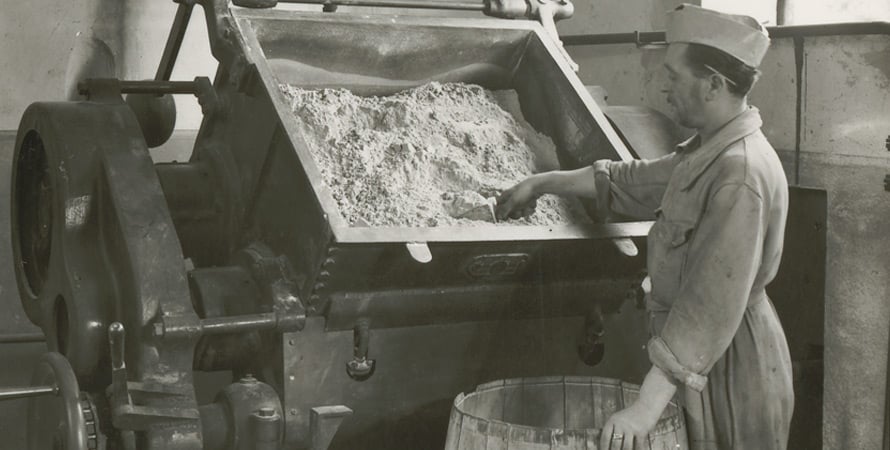 B&P, which had undergone a major setback and metamorphosis during the war, quickly recovered, and with Ulisse’s son, the legendary Adolfo "Dodo" Manfredi, it regained absolute supremacy over shooting competitions in a very short time; powders such as MB, which were joined by Anigrina Lamellare and GP and, in 1962, F2, were also used in parallel with hunting in the lines of cartridges for clay shooting.

Ballistic solutions capable of perfecting the performance of each individual cartridge in the various disciplines were sought and applied to this difficult subject. Suffice it to mention the very special "Vecchiotti" closure, identified and applied to first-barrel cartridges for its intrinsic characteristic of creating large and generous shot patterns, perfectly distributed thanks to the spirally arranged pleating of the section of cartridge case involved in the closure.

For clay shooting, the new cartridges were designated Ball Trap with AL, GP and MB, superlative cartridges, which were top performers in the World Championships and Olympic Games.

In the 1950s, the MB Tricolor (the name derives from the above-mentioned production of three seasonal cartridges identifiable by their green, red and light brown casings) was joined by the MB Super Star, in which the designation "Star" identified a cartridge with the modern star crimp, which was ballistically exceptional in terms of power, shot pattern and penetration. 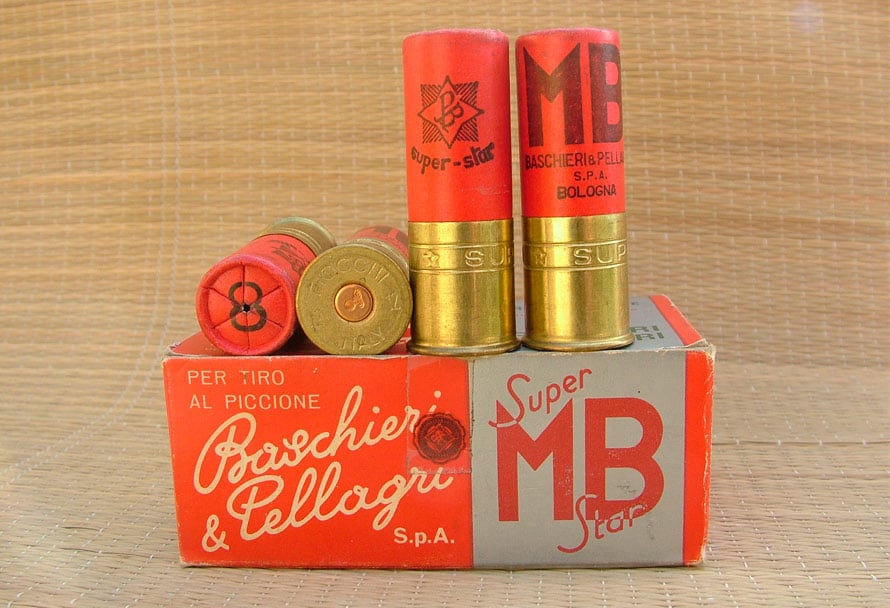 The MB Super Star was so successful that over time its classic green case was followed by two other loadings in red cartridge cases, with hardened, not nickel-plated pellets, highly suitable for the first barrel or for medium handicaps, and the Super Star in pale blue cartridge cases, for the first barrel with a reduced handicap of 24/26 metres, which was customary in competitions for ladies and youngsters.

However, while MB has remained the undisputed ruler of shooting and is still used today in the few pigeon competitions held in foreign countries where this speciality is permitted, it was the F2 powder, created by Gianni Manfredi, Dodo's son, in 1962, that provided the burst of innovation and high performance that the modern era once again demanded.

The F2 powder had further improved and modernised the ballistics of the clay cartridges, with even higher velocities and compact shot patterns, and last but not least with a reduced recoil according to the shooters.

The company's attention has always been focused on the search for the optimum level of comfort in the use of its ammunition; the recoil produced by the cartridges is in fact one of the most adverse factors for the shooter's concentration, and therefore indirectly a very important factor for the best result. These insights will then form the basis of further research carried out in the future. 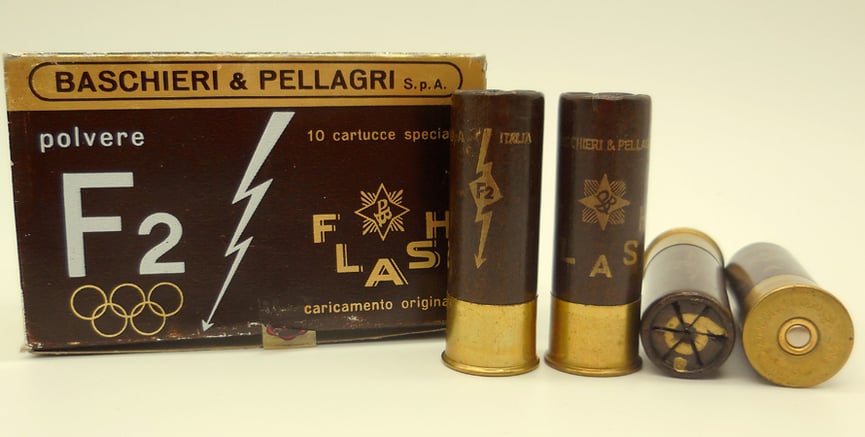 At the 1964 Tokyo Olympics, the champion Mattarelli validated the new F2 powder, adding the F2 Flash to his favourite MB Super Star and winning Olympic gold.

The 1960s and 1970s saw the range of B&P clay pigeon cartridges reach the pinnacle of the shooting world, winning all competitions.

The 1980s were undoubtedly one of the busiest and most prolific times in the quest for a ballistic development in which, objectively speaking, everything had already been discovered.

Conscious of the critical importance of limiting recoil energy and barrel jump, and returning to an area that had also been important in the past, B&P created the Gordon hull, equipped with an active base wad, capable of producing two highly positive effects: a reduction in recoil energy on the shooter and an improvement in ballistics linked to the perfectly preserved sphericity of the pellets.

The shot, accompanied by evident comfort, is found to be extremely rewarding, especially in the second barrel recovery, where the weapon remains more stable, and in the reduced fatigue of the athlete in those competitions that involve many successive series.

Ballistically, the sphericity of the pellets means that they bring better density, distribution and penetration/fracturing capacity to the shot patterns. The Gordon has achieved all this.

Since 1930, Baschieri & Pellagri cartridges have been the trusted choice for dozens of champions in order to attain the top step of the podium.

Olympians such as Giovannetti, Cainero, Falco and other athletes of international stature have contributed with their victories to keep the Bologna-based company's palmares high and almost legendary, with a clear expansion at a world level of the brand's presence and its solid qualities. 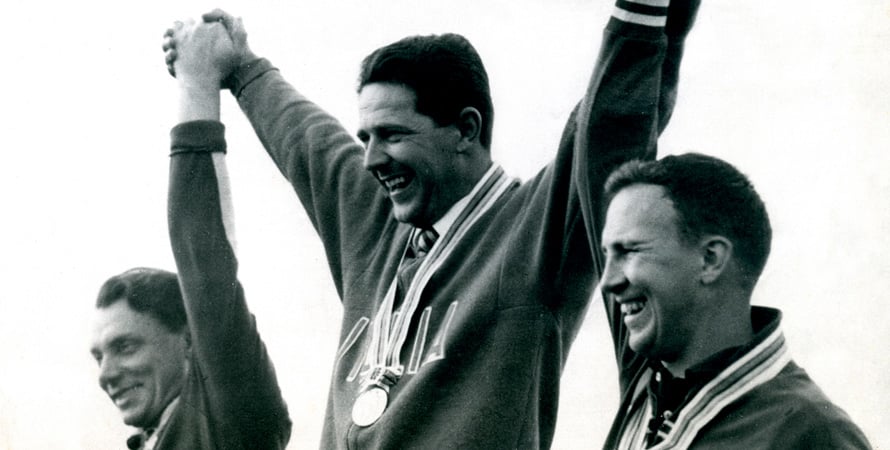 Baschieri & Pellagri, in turn, has created and supported the community of clay shooting athletes on a 'global' level, firmly establishing with its shooters a very high mutual exchange of trust and technical ballistic perfection.

Baschieri & Pellagri's current commitment, in the context of this philosophy, is to continue to provide enthusiasts all over the world with the best, most modern and effective products, that they can use in their competitions with the confidence and certainty of having the finest product at their side. 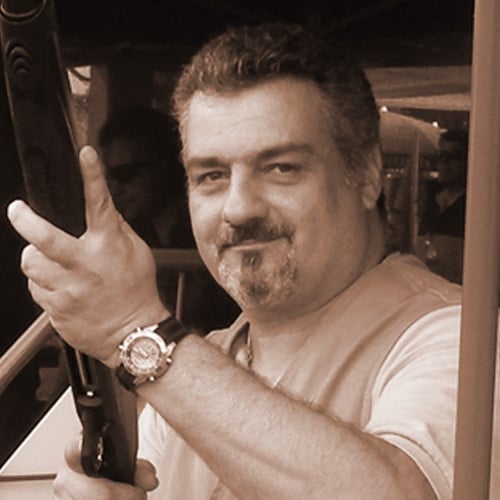 For several years Gianluca has been working as a ballistic consultant, contributing to the continuous improvement and development of new components and hunting cartridges. He is an avid hunter with more than 30 years of experience and is one of the top Italian experts in the field of smooth-bore and rifled-bore reloading. He has contributed as a moderator for various online forums and, thanks to his experience in this field, has been a collaborator of hunting and reloading magazines. His dream is to write a real manual dedicated to the art of reloading, and he immediately threw himself into the challenge of Hunting Spot to start working on that, also thanks to your contribution. 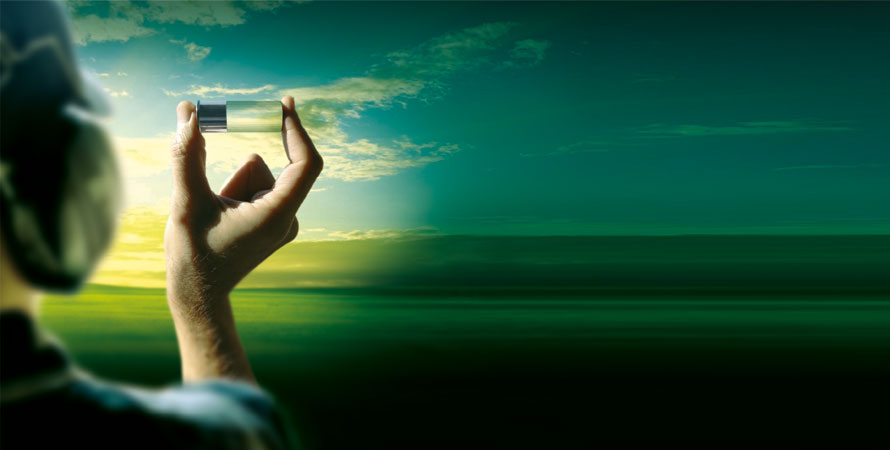 Talking about modern hunting, the trend is above all to limit the impact on the environment, in...

In 2020 the novelties at Baschieri & Pellagri continue. Following the trend of previous years, B&P...

Why Baschieri & Pellagri target shells produce the most consistent results

What’s the most important feature of a competition shell? A good question, that isn’t easy to...