You’ve been a recreation sporting clays shooter for a couple of year, improved your game, and have seen a concurrent improvement in your scores.

It’s time to go to the next level. Maybe your local club is hosting a registered shoot, or your shooting friends invite you to join them in a shoot at a club about an hour away. Time to get in the prep mode.

Sure you’re going to practice more, focusing on those target presentations that present problems.

Because you shoot a lot your ammo of choice is the low cost target loads. Doing some research you find that pro shooters choose a high quality load at their level of competition.

Like Gebben Miles, who shoots the B&P F2 Mach to help him get to the winner’s platform.

What makes the F2 Mach different than your standard target load? We took some to the range just to find out.

Its full name is Competition F2 Mach Professional Handicap which designates it as a top-of-line competition load.

The F2 Mach is the premier target load produced by B&P for its most demanding competition shooters.It has a strong lineage of championship including Olympic Gold Medals.

Like all of the B&P quality 12 gauge loads, it is based on the Gordon Case system which among other things dampens recoil. Our Hunting Spot Blog explains its construction and how it does that. Reduced recoil is important to competitive shooters who might shoot several hundred rounds at an event. It also helps control barrel jump for the second target of a report or true pair.

The other components are just as important and all work together to give the shooter consistent performance of every round.

The precut wad, specially designed for this ammo, maximizes reduced pressure on the pellets, avoiding their deformation, and increasing the residual energy and breaking power on the target. 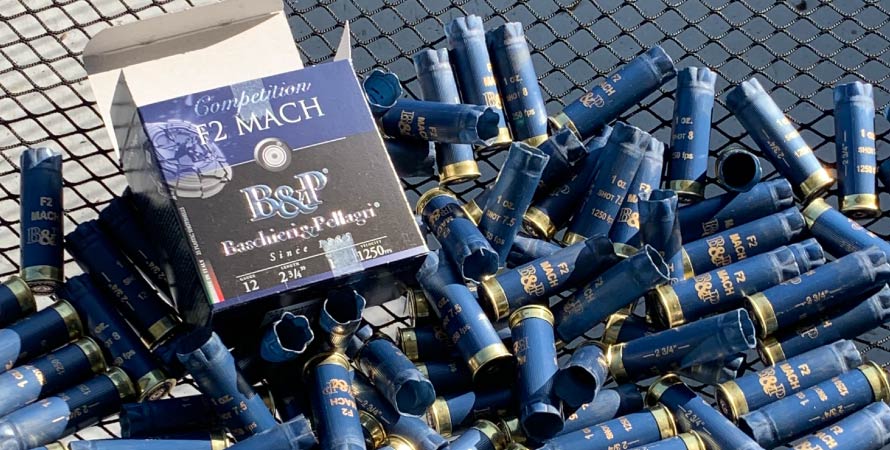 The precut section guarantees the regular and perfect opening of the single petals, giving the shooter consistent, tight shot patterns. At the same time, the wad, working in sinergy with the Gordon basewad, gives the ultimate feeling of recoil reduction.

My standard disclaimer. Up front, this is not a scientific approach. Your average shooter doesn’t pay that much attention to scientific data.

My friends and I are average recreational shooters. Like for many other shooters, our local range was closed for two months during the Covid-19 shutdown.

When it finally opened, along with all the other members we were itching to burn some powder and break some clays. A sunny , warm Spring day provided the perfect opportunity to try out the F2 Mach.

Two friends and I were shooting 12 gauges; them over/unders and me my old reliable Beretta A400 Xcel.

I asked my friends to shoot the first 50 targets on the course with the target load they normally shoot. Then at the mid-point they would shoot one box of F2 Mach 1300 fps, #7.5, 1 oz. loads and then the F2 Mach 1250 with the same shot load.

I would shoot the first 50 with the 1300 fps and then the 1250 on the second part of the course. Here are our observations.

One of the important factors in a sporting clay target load is reduced recoil to help the shooter quickly acquire the second target of a report or true pair.

Shooting 100 rounds, moving between stations, heat and other factors can induce fatigue. We typically don’t notice it, but that soft recoil can also reduce shooter fatigue. The Gordon case system provides shooters with higher velocity at reduced recoils.

My usual shell of choice for sporting clays is the Competition One shells at a much lower velocity of 1160 fps we had previously field tested.

In my semi-auto there was no noticeable different in recoil between the F2 Mach either in 1250 or 1300 fps and the higher velocity loads also cycled well in the semi-auto.

One of my friends was shooting a competitor’s light target load in #8 at 1145 fps.

After shooting his shotgun shells first he commented, “I shot the 1250’s first and noticed a reduction in felt recoil. Shooting the 1300’s next, the recoil seemed about the same as the 1145 in my usual target shells”. The other friend was shooting an economy load of #8 also at 1145 fps. He also said, “Recoil was barely noticeable compared to my standard load”.

After we finished and were at the Club office, another friend showed up to shoot.

I had some extra 1300 fps Mach 2 in the bag so asked him to shoot them and let me know what he thought. Using his Perazzi that afternoon he said, “I shot both the Competition One and F2 Mach. Although the Competition One at 1160 fps had less felt recoil, the F2 Mach at 1300fps was only ever so slightly more and barely noticeable. There certainly was no issue with recoil hampering the acquisition and shooting the second target.”

There are many factors that go into breaking a target, and breaking targets is what it is all about.

Whether you’re a recreational or competitive shooter, scores count.

That’s why we use score sheets when we shoot. This is where the F2 Mach comes into its own.

Our sporting clays range is primarily wooded, offering a variety of shots at mostly close ranges within 30 yards.

But like most courses there are a couple of stations designed to challenge even the most experienced shooters. This is where we saw the big difference between the F2 Mach and standard loads.

My friend shooting his economy loads told me, “The F2 Mach destroyed rather than just broke targets. This was most apparent on station 5, where I broke 10 straight with my usual brand of 12 gauge, then 10 straight with the B&Ps, which dusted every target, not even leaving a chip remaining”. He also consistently crushed a difficult target on station 6, a 45 yard high quartering away from left to right. 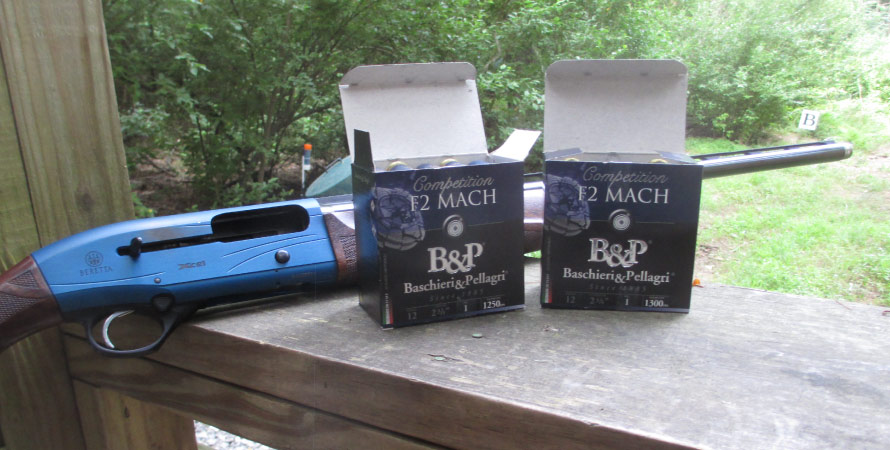 My other friend, an infrequent but average shooter, also noticed the difference in the way targets were destroyed versus broken.

I also noticed that difference and my final score reflected it. Despite too long a lull in time on the range, I had one of my highest scores ever.

I’ve shot economy loads in the past and can only attribute my improved performance to the consistent patterning of the synergy between the 5% antimony white shot and precut wad packed into the F2 Mach.

The friend that shot that afternoon paid the F2 Mach high compliment. He was really impressed with performance on long targets by saying, “Not only does it destroy targets at standard distances, where the shell really shines is 45 yard and beyond. Targets just crushed!

It is apparent that the high quality components make a difference at that distance.”

We saw with our own eyes how the F2 Mach performed on the range. It is always good to back that up by showing it on paper.

So the next day I went to the ranges patterning board for comparison of the evidence we saw on the range with a pattern on paper. Again a disclaimer: I’m not a ballistician, just your average shooter using the tools at hand.

I set up the patterning board with white paper on a cardboard backing. Then I marked a two inch circle as a point of aim and marked 15 inches from center to give me a thirty inch circle and wrote which load it was above the point of aim.

I set up my shooting table at the 25 yard distance marker. My gun was the same A400 Xcel with the Improved Cylinder choke tube. My first shot from the rest was with the 1300 fps load; second with the 1250. 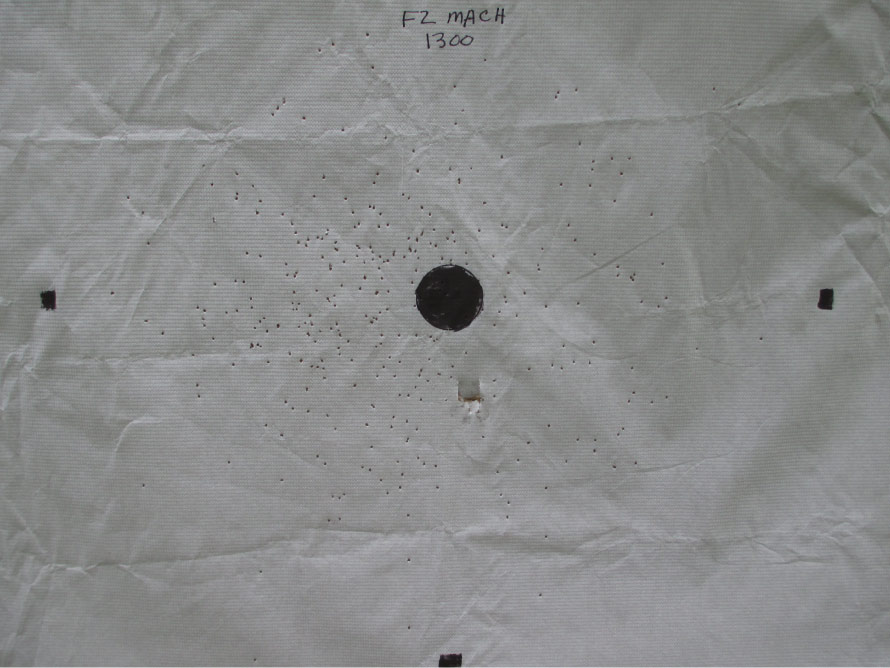 As the photos show, both loads patterned consistently, putting all shot within the thirty inch circle. I’ve patterned other standard and economy loads under similar conditions and usually a few shot hit outside the 30 inch circle and holes in the pattern.

Not with the F2 Mach. The precut wad delivered the hardened shot center of target. Look closely at the 1300 fps photo and you can see a hole about 2 inches below the point of aim which may be where the wad hit the pattern board.

They know that quality shells, made with high quality components, are as important to success as the gun they shoot or their personal skill.

In a previous blog on Quality Shotgun Shells we broke down the different components of a shell and the importance of quality in each of those components.

It is important to remind that one of the most important ballistic effects in competition ammo is conservation of shot roundness. Shot that remains round saves more residual velocity, more energy and it will maintain trajectory. The result will be a more concentrated and consistent shot pattern even at long distances.

Shot roundness is obtained thanks to the synergy of the two shock absorbers inside the ammo; one is the Gordon basewad and the other in the wad collapsible section.

Gebben Miles explains why these are important in this video.

Sometimes as recreational shooters we overlook these factors, choosing the most cost effective option, economy shells. As a result our scores may suffer but we don’t notice it.

Maybe registered shoots or a charity competition are in your future. To be competitive, in addition to practice, step up to the quality of the F2 Mach and you will see your performance improve. 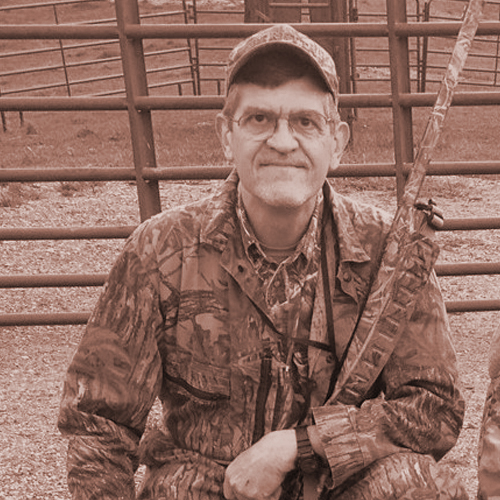 Don is a freeland outdoor writer living in the mountains of North Carolina. A lifelong hunter and wingshooter, he started out hunting dove and quail in his native state of Alabama. His travels in the U.S. Army gave him the opportunity to hunt throughout the U.S., Germany and pheasant in Korea. His passion for upland hunting has associated him with English Setters and along with his home territory he has followed them throughout the northeast and Midwest chasing ruffed grouse and woodcock. Don has 25 years of sporting clays shooting experience and is a NSCA Level I instructor at Biltmore Sporting Clays Club in Asheville, NC.

Is there a best shotgun gauge for upland hunting?

If you read our blog "A Primer: Getting Started with Upland Hunting", you might wonder in choosing...